An elegant pre-war elevator building, built in 1925, nestled on a scenic, charming, tree-lined block made even more spectacular by the presence of Central Park just steps away, 25 West 68th Street is a traditional building with tremendous appeal. Most the apartments at 25 West 68th Street feature eat-in kitchens, beamed ceiling and king-sized bedrooms, some even offer dining rooms. Building amenities include a large laundry room and bike storage. Apartments range from large one bedrooms to three bedrooms; the building's nine stories house 75 apartments. The charm and stability of the building's pre-war structure, the live-in superintendent and the full-time doormen with many years of superb work at this building make 25 West 68th Street not simply a home for its tenants but also a haven for them. The local Lincoln Square neighborhood brims with activity from restaurants, such as Nick and Toni's, and retail like Century 21 nearby. This area of the Upper West Side is within walking distance of the music and opera concerts, theatre presentations and choreographed dances presented at Lincoln Center, the films screened at Lincoln Square Cinema and AMC Loews Lincoln Square 13, and the dinosaur displays and butterflies exhibit in The Museum of Natural History. The very close proximity of 25 West 68th Street to the 1, 2, A, B, and C subway lines and frequent cross-town bus transportation eases commutes and other travels around the City. 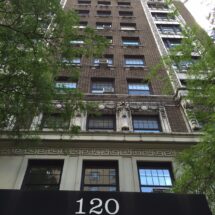