157 East 57th Street, built in 1960, consists of 19 stories and 111 apartment units. Located on 57th Street between Lexington and Third Avenues, this building is located primarily in the Midtown East neighborhood, although its location is also east enough to be considered within Sutton Place. With a full-time Doorman/Concierge, Live-in Superintendent, 3 elevators, onsite garage, and laundry facilities, this post-war high-rise building well accommodates its tenants. Apartment layouts range from Studios to 3-Bedrooms. Apartments contain a dishwasher and hardwood floors. Verizon FIOS is available in this building. The Midtown East area features the City's largest and most prominent retail stores, such as Bergdorf Goodman, Saks Fifth Avenue, and the Rockefeller Center's esplanade; further east, smaller, more mainstream stores predominate the area. Here you will find some of the busiest streets in the City, although you could seek out the calmer, less travelled side streets off the main thoroughfares. Upscale restaurants like the 21 Club and the Russian Tea Room coexist with local eateries like Hamburger Heaven and Alice's Tea Cup. 157 East 57th Street is well positioned for quick travel to sites as diverse as Rockefeller University, Pershing Square, LIFT Gym and The Museum of Modern Art. Subway travel is especially convenient with N, Q, R, 4, 5 and 6 trains available at 59th Street and Lexington Avenue, while the E and M trains stop at 53rd Street and Lexington. Many of the City's law and financial firms, plus Grand Central Station commuters, create a very densely populated area of Midtown East during the day but at night, the area's population drops significantly to emphasize this area's impressive, upscale Cityscape. 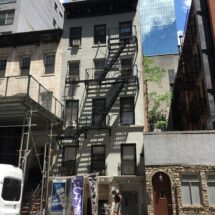 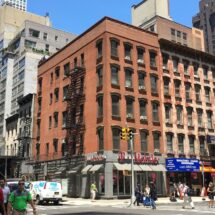